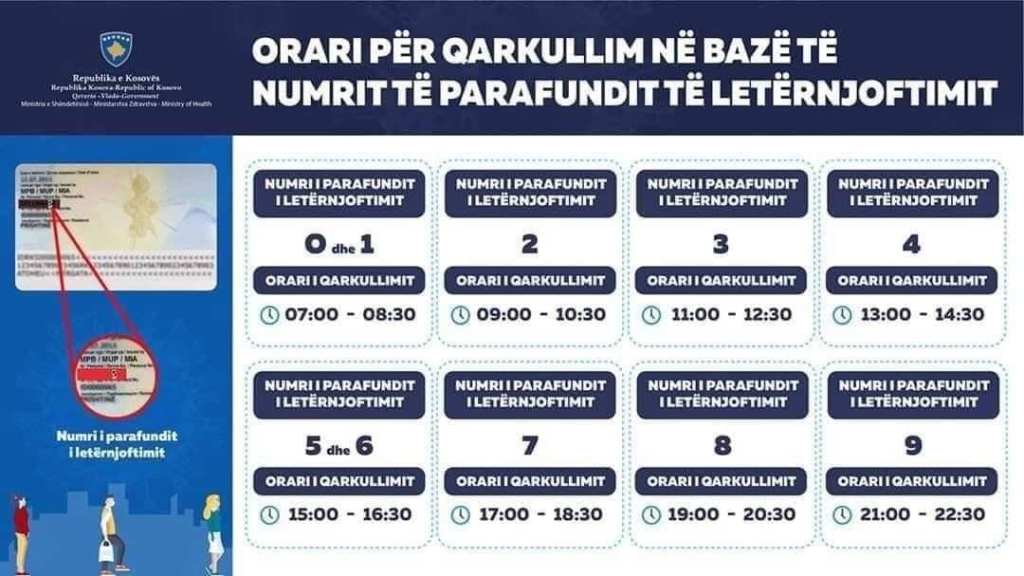 From today the government of Kosovo has put new measurements in place in order to decrease the spread of the coronavirus in the country.

Each person only gets to spend 90 min outside and this time is not optional, but decided by ones ID-number or passport number for non-citizens. Breaking this new rule will result in a fine of 2000 euros.

This is what the system looks like. Eight different groups, determined by the next to last digit in your ID-number/passport number, and starting from 7 AM ending at 10.30 PM.

To people’s positive surprise there will be a rotation in the schedule. And it’s all very well organized with a website called kurmedal.com where you can put in your number and see your time you’re allowed outside each day.

These new rules were announced Monday evening by the government and before today there has been a curfew between 5 PM and 6 AM.

A reason for these harder restrictions is that people were still going out a lot and hanging out in groups, especially since the weather has been great.

While driving past the outskirts of Pristina the other day and was surprised to see how many people that were out on picnics, hanging out in groups, enjoying in the sunny weather, 60-80 people spread out in just that area.

–People are obeying this rule more. When I was out today I didn’t see any crowds of people, says Fatbardha Abazi.

Even if it was high fine for the old curfew, the police still caught a lot of people breaking it. Their fine was 1200 euros and 2 days in prison.

The police have been seen all over Pristina the past few days. I was stopped the other day being a few minutes late by an officer who told me to go home and today a friend of mine working for the military was stopped 10 times.

Discussing this new rule with people I can notice a difference between foreigners and Kosovars having lived abroad reacting more strongly, being both shocked and critical. While I haven’t personally experienced any serious protests from Kosovars – even if I’ve heard there has been some.

In Sweden, the streets might be empty, but some restaurants and bars are still open with people sitting drinking beer outside in the sun.

To read about my analogy why Swedes are reacting differently to this crisis and how it’s related to our weapon export, click here.

What is the right method to deal with coronavirus is yet to early to tell. However more critical voices from scientists within Sweden has been raised these past few days. Especially since so many more people in Sweden are dying based on death per million citizens.

Today Sweden has 1203 cases of deaths from coronavirus. Norway 146, Denmark 299 and Finland 72. Kosovo has in total 9 death cases.

Tina Sandström from Piteå is sceptical about how the Swedish government has handled the cirises so far.

–That the the public health authority is discouraging people from going to parties and funeral while they at the same time is ok with people visiting restaurants and bars gives very mixed signal, she says.

–I think Sweden is prioritizing the economy before public heath and companies over human lives right now, Tina Sandström says.

Here you can see a video I made about the first weekend coronavirus came to Kosovo. This is how quickly it all changed here.