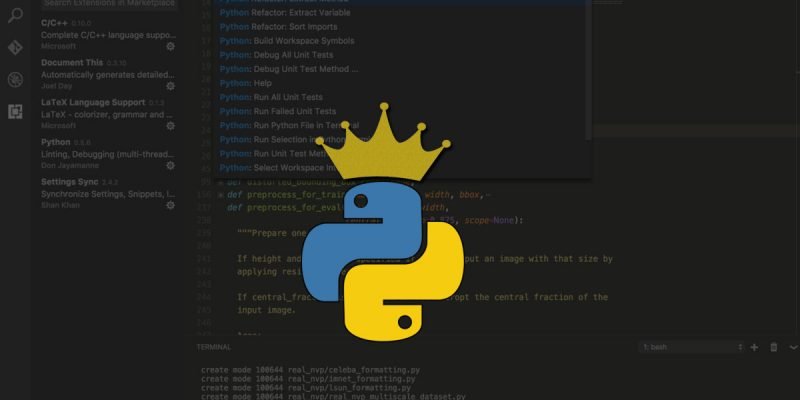 Python has been around since it was created by Guido van Rossum back in 1991. But what makes Python such a powerful language? And why is it mandatory on a lot of jobs you apply?

What's so good about Python?

Python, in essence, is a general-purpose language which means you can create – well pretty much anything with it. Professionally speaking, Python is amazing for backend web development, data analysis, AI and scientific computing. A lot of devs have also used Python for building:

What's good about Python is probably its beginner friendliness. Python was originally designed to be easy and fun to understand. (Fun fact: Its name came from Monty Python so a lot of beginner tutorials reference it).

It's also very flexible. As a dynamically typed language, Python is known to be very flexible. This means that there are no strict rules on how to build features. And this gives you a lot of flexibility solving problems using all the kinds of methods you want to.

Additionally, Python is very forgiving on errors. You'll still be able to compile and run a problem until you hit the problematic part.

How powerful is Python as a programming language?

In terms of its computational limits, Python is no various than other general-purpose programming languages, that is to say, it’s equivalent to the Turing machine computational model. You can code anything that you can in languages like C, C++, C#, Java, etc.

In terms of code execution efficiency, well let’s not beat around the bush. Python is slow. It’s a dynamically typed, interpreted language (but take a look at Cython). Interpreters add a lot of overhead. Dynamic typing prevents code optimization. If you implement your algorithm (as best as possible) in e.g. C++ and Python, the C++ implementation will always be notably faster.

But, and this is very powerful, you can load and execute C/C++ written library code from Python and the wrapping mechanism is really easy. I haven’t seen any language in which it would be done so simply and straightforwardly (and that includes C#). So, if you choose that you need C/C++ level of efficiency for your algorithm core, you can accomplish that very well from Python.

And there’s multithreading, of course. Python is not much good at it, as its interpreter uses a global lock for thread synchronization. So your threads run only pseudo-parallelly (they basically interleave on a single CPU core), with the exception of I/O operations. It’s sort of understandable as it’s really difficult to implement MT in an interpreter (the interpreter itself would have to be thread-safe, capable of switching context safely at any moment). There is the concept of coroutines that may somewhat emulate MT, namely combined with event loop engines written in C/C++ that may execute the coroutines from multiple threads. This may help, e.g. for server systems, but it’s not a true, preemptive MT.

Where can you use Python?

To be honest, it’s such a powerful language that almost everything can be created with Python! That's why while creating YouTube, Instagram, Netflix, and even Quora they used Python.

Python is easy to learn, user-friendly and powerful, it’s not a wonder that Python listed in Top 5 coding languages.

It’s great for Web Development. In this state, I have to state at least Django- the most popular Python framework. Its unique feature is that within a single package there is everything you need to build a web application, from low- to high-end. It’s worth to add that such popular web applications as Google, Instagram, YouTube, and even Quora use Python!

Thanks to many libraries it is a great language for scientific computing too.

There is a list of 5 most popular Python scientific libraries and tools below:

Famous applications that were built with Python

Over its 30 years of existence, Python has definitely become one of the most popular languages. It became so famous because it allows devs to focus on their apps instead of reinventing the wheel. Or fix it for that matter.

If you take into account the number of questions asked in StackOverflow, Python had an incredible increase. Check the graph below:

To give you an example of what makes Python such a powerful language, let's see some apps written in Python. The top three are:

As you know, the app that completely changed the world of digital photography was Instagram. It made it instant, a lot more accessible and widespread.  It currently has more than 400 million active users per day.

This obviously negates any notion that apps built with Python are not scalable.

According to the Instagram engineer Hui Ding, the motto they used while creating Instagram was “Do the simple things first”. And that's what every Python developer does because the language allows them to.

As one of the most-used web apps, Pinterest relies solely on Python and Django to deal with the rapid large amount of content. In fact, this site has been using Python since the very first day of release.

Spotify is currently the largest streaming service, with annual revenue of over 4 billion dollars.

This makes it one of the most major market players, and simultaneously one of the top Python users among them all. The company chose that Python was the best choice because of the development speed. And it also offers advanced data analytics, so that helped too.

This allows Spotify to manage various functions like Radio and Discover, that are based purely on personal music preference of users.